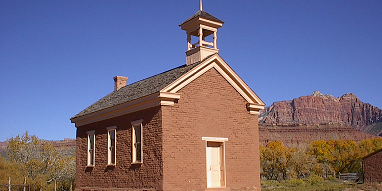 A four-month restoration of Grafton’s most famous historic building was completed in March 2000 and has significantly extended the structures life.

Springdale, Utah-based contracting company Sun Design was awarded the competitive bid for the extensive stabilization and restoration effort of the then-115 year old pioneer-built edifice.

The most noticeable restoration involved patching major cracks in the building’s exterior wall. Each wall has three layers of hand-made bricks, but some of the cracks went through the entire four-foot thickness. New adobes were made with the same pioneer techniques (except for the gas-powered mixer). Dirt from the original pit was also used. The adobe chimney was also built.

A major structural improvement added in the form of an independent support system for the roof. During an initial stabilization effort in 1999, a new roof was installed. While this project curtailed leaks, it also added new weight to the adobe walls. The new support system solves this problem.

Constructed with hewn basalt boulders, the foundation received a touch up and a gravel apron was added to the perimeter to improve drainage away from the walls.

A new hand-built wood door was designed from a previous version and installed. Custom-made window frames and glass were added to enclose the interior.

A platform was installed to allow visitors to see in one window. Holes in the interior floor and walls were patched.

Rotten wood soffets were replaced and the bell tower was stabilized. Both the roof and trim received a coat of paint.

With this major effort completed, the weather tight building will likely not need major work for another generation.

This crucial project was made possible through the combined efforts of many people. The Partnership wishes to thank them all. Financial support came from the George and Dolores Dore Eccles Foundation, Washington County Community Development Block Grant (CDBG), and an anonymous donor.

The Partnership is pleased that this effort reflects the cooperative spirit that Grafton is known for.