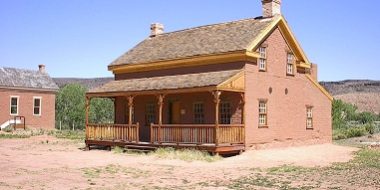 During the last eighteen months, the Partnership’s cooperative efforts have been lauded by the Utah Heritage Foundation and the Utah Center for Rural Life.

Established in 1966, Utah Heritage Foundation was the first statewide preservation organization in the western United States. Its mission is to preserve, protect, and promote Utah’s historic environment through public awareness, advocacy, and active preservation.

Each year, the Foundation honors exemplary historic preservation projects from across the state at its annual Heritage Awards dinner.

In 2000, the Foundation chose GHPP for its most prestigious annual award. Then in 2001, the Foundation announced that the Partnership will receive a Certificate of Recognition at the annual Heritage Awards dinner.

More information about the foundation and its work is available by calling (801) 533-0858 or visiting www.utahheritagefoundation.com

The Partnership’s Board of Trustees wishes to thank the Utah Heritage Foundation for its continued technical and moral support.

Each year the Center bestows this award on one rural Utah organization that exemplifies these three characteristics. The Partnership thanks the Center for this award. For more information about the Center visit http://utahreach.usu.edu/ucrl