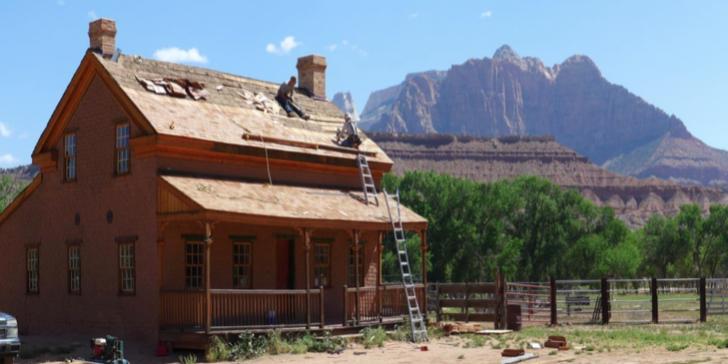 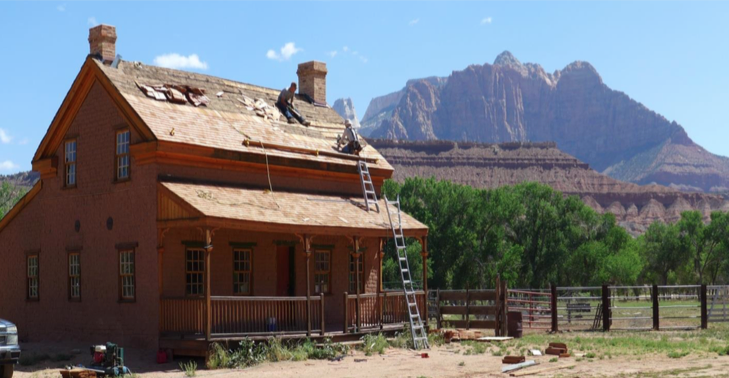 Thanks to funds provided by the Utah Division of State History’s matching grant program and the Town of Rockville, funds were used to complete work on the Russell Home. Repair work included new wood roof shingles on the south side of the home and lathe and plaster replacement on walls and ceilings in two bedrooms on the main floor. In addition, adobe walls and foundation repairs have been completed on the schoolhouse and thanks to Washington County exterior wood on the schoolhouse has been painted. We thank our many partners for their continued support.

We wanted to share these stories with you, one story is from Colby Gower who returned John York‘s grave marker to the Grafton Cemetery, he wrote: “As for my history of the York family, I have none – I literally found this grave marker while out walking through the forest one day and it plagued me that it seemed like it didn’t belong there. I personally had been to Grafton as a child many years ago and remembered the distinct last name of York from there, so I put two and two together, did some research and found that this grave marker I had found west of Cedar City belonged in Grafton Cemetery – almost like John York was reaching out to me to correct this wrong.”

“How it got to the valley west of Cedar I’ll probably never know – it seems more like a bother to move it than it would be worth as a prank or even just malicious behavior – this just seems so out of the ordinary. Someone literally went out of their way to move a grave marker to a remote location west of Cedar City. Its appearance right next to the others in Grafton cemetery was unique – all the other matching York wooden grave markers there were darker in color, probably due to the nature of that little valley as it surely gets no snow and very little rain, but here in Cedar, it was likely covered with snow several times in the years it was missing, and also sun-bleached too as its color is definitely lighter than the others. Anyway, I’m glad to have found its rightful resting place and to have been the person to have brought it home.” − Colby

Another story is from Mary Smith of Colorado. She wanted to buy a book about Grafton. She said, “We have visited Grafton numerous times since the mid-1980s. Odd story — with a name like Smith, when it came to naming our third son in 1999, we decided we would look at the atlas rather than the baby name book. We never got that far because my husband immediately suggested Grafton as a name, and we knew it was the right fit for us. Grafton was in Grafton on his first birthday.” We also had a note on a donation envelope from Clive Grafton-Reed from England who had to see Grafton because of shared name. Another note was from Mark who lives in Grafton, Massachusetts, this is a cool town to tour.

Jim Jones sent us this Sherratt Library photo, which he believes to be Cedar Pete, Bill or Wiley, and Poinkum who are buried in the Grafton Cemetery. He also found evidence in Ashby Pace of New Harmony history that talks about Poinkum’s family. “”He was a good Indian. He would travel back and forth through here. Poinkum had a boy named Puss and another boy named Wiley.” 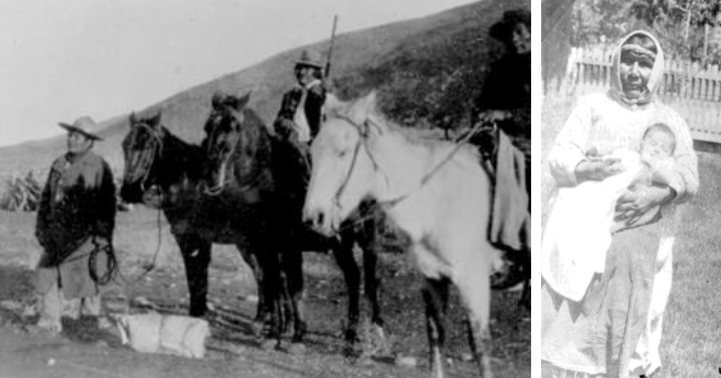 The annual Grafton Reunion, will be held on September 26, 2015 from 12-2:00 PM. Bring your lunch, hat, chair and memories to share. The Partnership will have a display of historic pictures in the schoolhouse and items such as books, pictures of Grafton and t-shirts. There will be a program and if you have any stories you would like to tell about Grafton or a song to sing, call us (phone 435-635-2133) Everyone is welcome. Joe Charbonneau set up a Grafton Reunion Facebook page. Where anyone can upload photos, histories, at https://www.facebook.com/graftonutah . It is also posted on our webpage.

As a great friend to Grafton, I hope you know how much you mean to us and how important your role is to help us preserve Grafton. Donations are gratefully received and tax deductible. You can donate by mailing a check, or by using a credit card on our secure web page at www.graftonheritage.org. Just click on Support Us. Or remember us in your will. We also updated our web site with some of our historic photos.