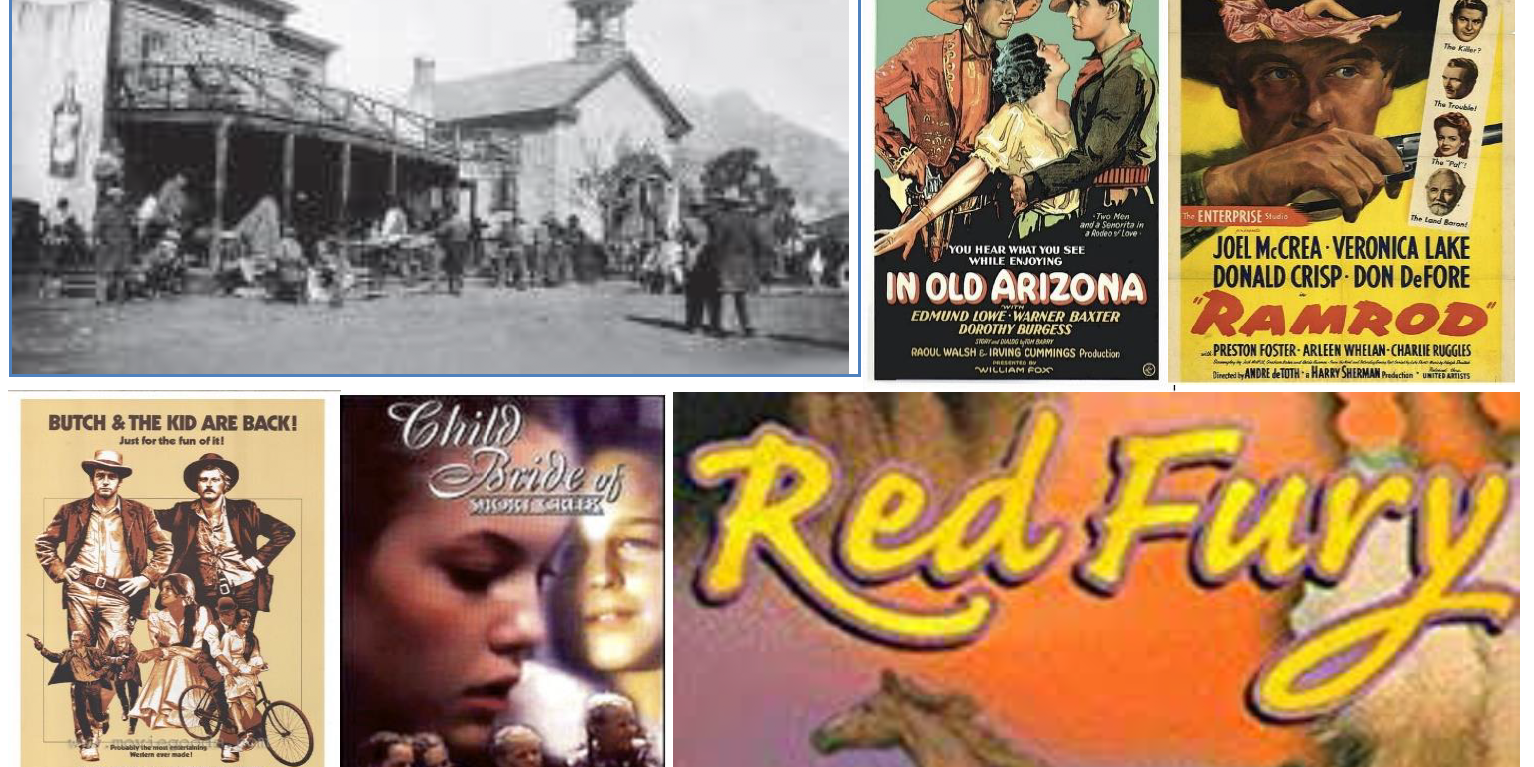 This year is the 50th anniversary of the filming of Butch Cassidy and the Sundance Kid. The beauty of the landscape drew western movie makers to southern Utah 1927-1979. In 1929, In Old Arizona (the first talkie filmed outdoors) filmed a scene in Grafton. It stared Warner Baxter, who won the Academy Award for this role as the Cisco Kid. He played a charming bandit that plays a cat-in-mouse game with sheriff that is trying to catch him while he romances a local beauty. As James V. D’Arc wrote in his book, When Hollywood Came to Town, there was a scene of a shootout where three cowboys fire shots at the Cisco Kid from a high cliff above Rockville. Another chase scene was filmed on the Rockville Road. Not accustomed to sound recording, the driver of the stagecoach and team (brought hastily from LA) barked profanities to townspeople to get them out of way. “Many of the locals left, shocked because their womenfolk had been exposed to such vigorous language,” Walsh wrote.

In 1930, The Arizona Kid was filmed in Grafton, starring Warner Baxter, Carole Lombard, Theodore von Eltz, and Hank Mann. It was a sequel to The Arizona Kid, but it didn’t do as well at the box office as the blockbuster film In Old Arizona. The Arizona Kid (Baxter) carries out his mission as a Robin Hood-type bandit while posing as a wealthy and carefree miner. He falls for an eastern girl, Virginia Hoyt (Carole Lombard). She is accompanied by Dick Hoyt (Theodore von Eltz), a man the Kid presumes to be her brother, but who is actually her husband. The Kid’s mine is raided, two of his friends are killed, and he learns that Dick and Virginia are the culprits.

In 1947, Ramrod was filmed in Grafton. This film starred Joel McCrea, Veronica Lake, Preston Foster, and Lloyd Bridges. It was named Utah’s Centennial Film because it marked the 100th anniversary of the arrival of Mormon pioneers into Salt Lake Valley. Since the river had changed its course as the result of a violent storm the studio paid to have the Virgin River rechanneled to bring it closer to the Grafton town site. The result is evident in Ramrod’s opening scenes when a wagon crosses the Virgin River and, after coming up the banks, enters the outskirts of Grafton. A movie set was built, complete with a saloon, livery stable, blacksmith shop, and “Grafton Hotel.” For the most part, these structures were not simply Hollywood fronts, but functional buildings, where interior scenes were filmed. The film is a story about a daughter who is slighted by her cattle-baron father. She then sets up her own ranch and puts in motion a dispute that escalates into an all-out bloody feud.

In 1969, scenes in Butch Cassidy and the Sundance Kid starring Paul Newman, Robert Redford, and Katherine Ross were filmed in Grafton. The movie was nominated for seven Academy Awards and won four: Best Cinematography; Best Original Score for a Motion Picture; Best, Song (“Raindrops Keep Fallin’ on My Head”); and Best Writing, Story and Screenplay. In 2003, the film was selected for preservation in the U.S. National Film Registry by the Library of Congress, which recognized it as “culturally, historically, or aesthetically significant.” A framed home was built on the corner across the street from the schoolhouse for the schoolteacher, played by Katherine Ross. It burned down years ago. The author, D’Arc, explains that the principal cast would always eat at Dick’s Café in St George. Paul Newman would make the salad for everyone. Even then, before Newman’s Own, he would have the ingredients brought to him and he’d make a salad dressing. With profits from this film, Redford purchased additional land at Wildwood property and renamed it Sundance, which he ran initially as a ski resort and later as the Sundance Institute for independent filmmakers.

In 1981, Child Bride of Short Creek, a TV movie, was filmed in Grafton, starring Diane Lane, Helen Hunt, Christopher Atkins, and Conrad Bain. A Korean War veteran in Arizona tries to keep his girlfriend away from his polygamist father.

In 1984, The Red Fury was filmed in Grafton, starring Will Jordan, Wendy Lynne, Calvin Bartlett, Katherine Cannon, and Juan Gonzalez. A story of three people, their unlikely friendship, and a wild stallion that changes their lives forever.

Everyone is invited to the annual Grafton Reunion, September 28, 2019 at Grafton from 11-2:00 P.M. Bring your lunch, hat, chair and memories to share. The Partnership will have a display of items such as books, pictures of Grafton and t-shirts. There will be a program and if you have any stories you would like to tell about Grafton, or a song to sing, call us (phone 435-635-2133). A Grafton Reunion Facebook page has been set up. Where anyone can upload photos and histories at: https://www.facebook.com/graftonutah It is also posted on our webpage.

A special note of thanks to all who left us a donation in the Grafton donation box. You can donate by mailing a check or by using a credit card on our secure web page at www.graftonheritage.org. Just click on Support Us. Or remember us in your will.